Birds of prey represent the highest number of collisions at national level as they are responsible for approximately 30% of cases. The birds of prey most commonly involved are the Common Kestrel, Common Buzzard and Barn Owl.

The diurnal Birds of Prey most affected only cause damage in small proportions. The Common kestrel (weight: 200g) is still the species most hit France, but it causes minor damage in only 0.4% of cases it is involved in. On the other hand, the Common Buzzard (weight: 800g) causes damage in 6% of the collisions it is involved in.

The Barn owl is the nocturnal Bird of Prey most involved in collisions. The other nocturnal Birds of Prey encountered on airfields are the Short-eared Owl, and in a smaller proportion, the Little Owl and Tawny Owl.

Passerines are involved in almost 17% of the total number of collisions. The species most encountered are the Swallow and Swift, Skylark, Common Starling and House Sparrow.

Swallows and Swifts account for 10% of cases. Within the space of 20 years a third of the Swallow population has disappeared. These species have been protected since 1976 and destruction of their nests is prohibited. However, their visits to French airfields are on the increase, varying from year to year.

However, as these birds weigh only 30 grams, even if they are many, they cause very little and minor damage.

The Skylark is the species most responsible among the sparrows with 41% of cases. It is a very widespread species in Europe but given its 35 cm size and its 30 to 50 gr weight, it causes very little damage to aircraft.

The Starling accounts for 23% of cases. Despite its low weight (60 to 90 gr), this bird can pose a real danger to aviation safety when groups of up to tens of thousands of individuals gather within the airfield.

Finally, the House Sparrow encountered in 20% of cases, is not considered dangerous to aviation, given its weight (30 gr) and its behaviour.

Birds of the Colombidae family (mainly Domestic Pigeons and the Woodpigeon) and Limicoles (mainly the Lapwing) are involved in about 6% and 4% of the total number of collisions respectively. These two species can also cause damage, which, in the past, has led to accidents.

Among the collisions caused by mammals, Lagomorphs are involved in 71% of cases (equally distributed between Rabbits and Hares) and Foxes account for 17% of cases. 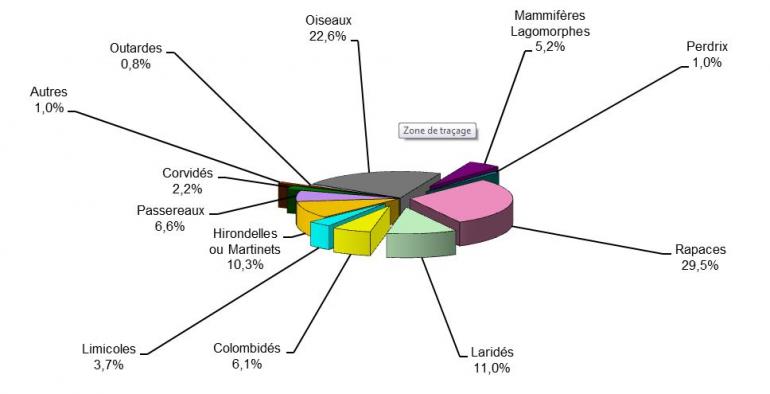 We note: Since 2001, the STAC has published a regular report analyzing animal risks in France.