Animal collisions are only followed up in 15% of cases. However, these incidents classified as serious correspond with collisions that have had the following effects: fairly serious damage to the aircraft’s structure or engines and also other impacts on air safety or airlines’ operations such as: engine stop, caution landing, take-off interrupted, U-turn, delay.

In France, in the 2001-2010 decade, nearly 9% of animal collisions were judged to be serious, and nearly 6.5% caused damage. These figures remain 10 points below the averages observed in the years 1980-1990. These positive trends are linked to the action taken by civil aviation and airfield operators at national level.

However, although the number of serious collisions is relatively stable, the total number of animal collisions has been constantly increasing since the 1980s. This trend also observed at international level is explained by a set of factors, the most significant of which are:

▸ The rise in air traffic; Over the last few years, it has increased by 2.6% in France (smoothed average annual rate over the 30-year period).

▸ The urbanization of our regions, which is pushing animals, especially birds, towards fallback areas like the planted surface areas of airfields.

▸ Technical innovation in the aeronautics field and in the design of aircraft engines in particular. These improvements are represented by the design of more silent and more efficient engines, increasing the reaction time of birds in flight.

▸ The optimization of animal collision notification procedures, which feeds the collisions database in a more precise way.

Rates and number of collisions calculated at national level on commercial aircraft.

Since 1912, more than 90 civil aircraft have been lost worldwide, claiming more than 300 victims. Here are a few examples:

The parts of an aircraft most impacted during an animal collision are respectively the front tip of the aircraft (radome, nose, windscreen), the engines, the lift elements (wings and tailplane), the fuselage and the landing gear. The engine remains the most sensitive part since nearly 50% of animal ingestions cause damage. 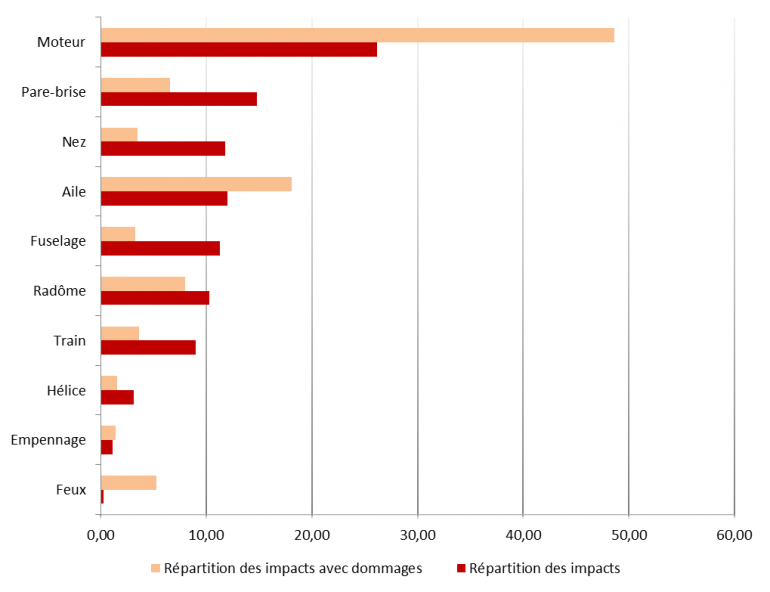 In France, over 80% of collisions occur during landing and take-off. This percentage reaches 90% internationally.

Among all recorded collisions, the serious incidents are twice as numerous on take-off than on landing

Distribution of all collisions depending on the flight phase (Period 1980-2014. Source Pica)

Distribution of all collisions depending on the flight phase (Period 1980-2014. Source Pica)