“AIR FRANCE 1407, DE GAULLE APPROACH, good morning” A sentence which shall not become widespread from October 12th, 2017, as DGAC decided not to apply the requirement to use the English language on the main French international aerodromes, on the basis of this report.

Within the framework of the Implementing Regulation (EU) 2016/1185 of 20 July 2016 amending Implementing Regulation (EU) No 923/2012 as regards the update and completion of the common rules of the air and operational provisions regarding services and procedures in air navigation (SERA Part C) and repealing Regulation (EC) No 730/2006, the Civil Aviation Technical Service (STAC) was entrusted a study related to the applicability of the paragraph 14015 of the appendix in the regulation n°923/2012 modified - said "SERA C".

This study addresses the safety aspects within the scope of paragraph 14015, while taking into account the applicable provisions of the European Union and of the French laws on the use of languages.

The study shows the absence of safety benefit in France from the requirement to use the English language for communications between the ATS unit and aircraft for reasons of safety, so as to avoid incursions of aircraft on an occupied runway, in particular on each of the six concerned French aerodromes.

To reduce the risk of runway incursion, the aerodromes concerned by the regulation obtain more safety benefits with the ground surveillance and alert tools and more generally with the application of the other measures of the EAPPRI plan.

Accordingly, the French authorities informed the European Commission and the European Aviation Safety Agency of the decision not to apply the requirement to use the English language on the concerned aerodromes, in accordance with paragraph 14015 of the Annex to the SERA C.

In accordance with the paragraph 14015, this study was communicated to the European Commission and to the European Aviation Safety Agency and put online on the STAC website so that it is made public.

Further to the publication of this study report, the ICAO published in THE ICAO JOURNAL VOLUME 73, NUMBER 2 2018 an article which explains the position of the DGAC on the bilingualism in France.

A copy of this publication can be downloaded from the ICAO website at the following link : 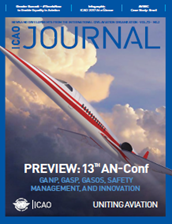